More than one million people are on the run in Syria, and most experts say this massive refugee situation is likely to get much worse before it gets better.

As always, it is often the children who tend to suffer the most.

The crisis in Syria today compares to massive historic tragedies, Iraq in 1991 and Rwanda, 1994, in terms of the number of people displaced. An additional 2 million Syrians are internally displaced. With as many as 8,000 people leaving Syria every day the UN is concerned that the number of refugees may triple by the end of the year.

That means as much as 15% of all Syrians could be refugees by the end of the year.

Several new reports out this week emphasize the harm this crisis is doing to children – a harm that can persist after the crisis passes, which makes responding to it now more urgent than ever. 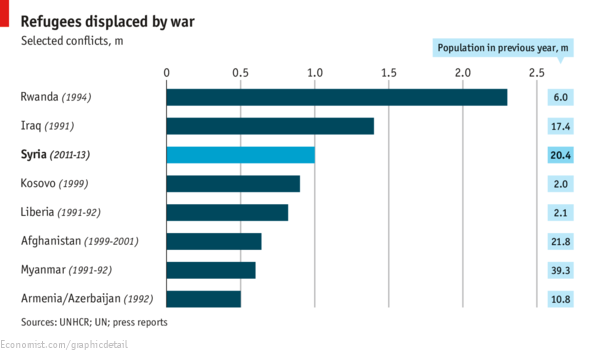 With four million people receiving food aid, the situation is dire for everyone, but children are at an even greater risk, as noted by Reuters and Guardian news stories based on a new report by Save the Children.

According to a similar  UNICEF report released yesterday, the conflict threatens to create a lost generation that will cause long-lasting harm on the country.

“Millions of children inside Syria and across the region are witnessing their past and their futures disappear amidst the rubble and destruction of this prolonged conflict. We must rescue them from the brink, for their sake and for the sake of Syria in future generations.,” says UNICEF Executive Director Anthony Lake in the report.

UNICEF estimates that roughly half of the people living in Syria affected by the conflict are children. An additional 800,000 children are living as refugees in countries like Jordan, Lebanon, Turkey, Iraq and Egypt.

The two years of fighting has damaged or closed one in five schools and reduced access to clean drinking water by one third. UNICEF plans to provide clean drinking water through April to 10 million Syrians by delivering 1,000 metric tons of water treatment supplies. Further interventions include psychosocial support for children and their families, education supplies and a second-phase polio and measles vaccination campaign that will reach up to 3 million children.

These report by Save the Children focused on the violence faced by children in Syria. In its  report, the NGO says that one out of ever three children are being targeted in the war.

“For millions of Syrian children, the innocence of childhood has been replaced by the cruel realities of trying to survive this vicious war,” said Carolyn Miles, president and CEO of Save the Children. “Many are now living out in the open, struggling to find enough to eat, without the right medicine if they become sick or injured. As society has broken down, in the worst cases, hunger, homelessness and terror have replaced school for some of these young people. We cannot allow this to continue unchecked; the lives of too many children are at stake. “

Save the Children CEO Justin Forsyth visited Lebanon last week to see the children who have fled from Syria into the country.

“I have to say I have been shocked and horrified by the stories that I’ve heard from the children here in Lebanon who fled from Syria,” Justin Forsyth, chief executive of Save the Children, told The Associated Press at the group’s offices in Beirut.

However, nearly 80% of the funding needed to mount a regional and country level response for Syrian families remains unmet. UNICEF launched a $195 million appeal in December to fund its response through June 2013. Funding gaps in the appeal means that UNICEF’s services may end soon, warns the agency.

“Without immediate additional funding, UNICEF will have to halt a number of key lifesaving interventions by the end of March 2013. It will also be unable to meet the basic needs of children – including vital water and sanitation services, critical measles and polio immunization campaigns, life-saving neo-natal interventions and emergency medical care,” says the report.

UNICEF and other humanitarian agencies have struggled to gain access to the people affected by the violence in Syria. The Syrian security forces have made it hard for aid workers to enter war-torn cities and a group of rebels recently kidnapped 21 Filipino UN peacekeepers near the village of Jamlah in the Golan Heights earlier in the month. They were all safely released this past Saturday.

“We urge all parties to allow unhindered access to children affected by the violence – wherever they are,” said Lake. “We can only meet the growing needs of this crisis if we get the help we need today.”

The UN High Commissioner for Refugees Antonio Guterres recently warned that the the pace of people leaving Syria suggests a continued growth in refugees if the conflict is not resolved.

“If this escalation goes on … we might have in the end of the year a much larger number of refugees, two or three times the present level,” said Gutterres to reporters in Ankara. “Everything depends on whether or not we will have a political solution but we need to be prepared for a very strong increase of the present numbers.”

Meanwhile, countries like Lebanon are starting to struggle under the pressure of the influx of refugees. Lebanese President Michel Suleiman urged the international community to provide further support on Monday.

“Those numbers are more than the capacity of any country to bear,” he said. “It’s not just a matter of material help and relief – the geographic and demographic capacity is saturated and the problems resulting from this massive number affect us socially, economically and on security.”