When people take a break from debating whether Africa is or is not rising, they like to talk about China. The emerging economic powerhouse is making its mark on Sub Saharan Africa by support port projects in Kenya, mines in Zambia and standing behind the Sudanese government.

The activities mean China is slowly becoming a development player and does have an impact on the other big donors. A project from AidData and William & Mary University estimated that China has committed $75 billion for aid and development projects in Africa.  That is less than the $90 billion committed by the US during the same period. However, some fear that China is using its money to not only wield influence over the continent, but impose a sort of neo-colonial rule over some countries.

The governor of the Central Bank of Nigeria, Lamido Sanusi, shared his concerns back in March.

Africa must recognise that China – like the US, Russia, Britain, Brazil and the rest – is in Africa not for African interests but its own. The romance must be replaced by hard-nosed economic thinking. Engagement must be on terms that allow the Chinese to make money while developing the continent, such as incentives to set up manufacturing on African soil and policies to ensure employment of Africans.

Harvard University professor Calestous Juma disagrees. He points to the fact that Malaysia, not China, is the leading Asian investor in Africa. He says that he teaches Asian students at Harvard who come to the university to learn about the continent before acting. 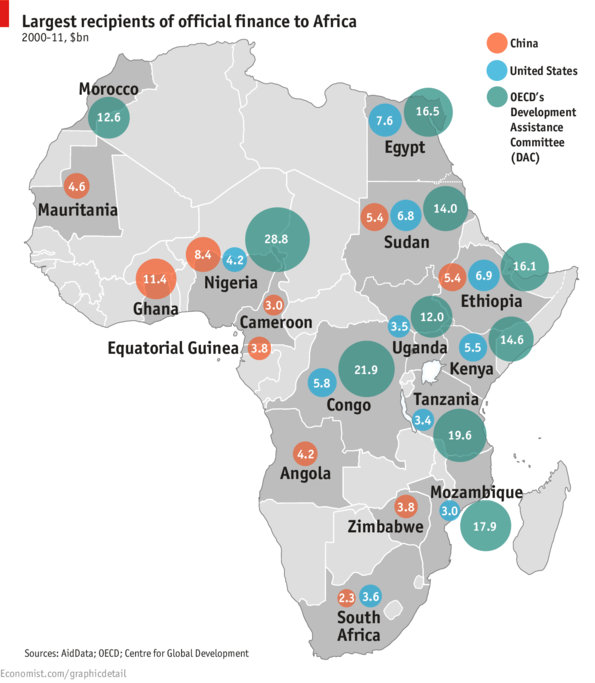 “China is in Africa because it is being invited. It is a choice of Africans to engage with China. They are being invited because Africa has serious problems in infrastructure. You can’t grow an economy if you cannot move goods and services. In the last 30 years, all our partners were telling us not to put money in infrastructure because it would distort our macroeconomic setting,” argues Juma.

Leaders like Malawi’s Joyce Banda have made their appreciation for Chinese investments well known. She even urged more investments from China at the beginning of the year.

“I would like to encourage more Chinese investors to come and invest in Malawi,” said Banda at the opening of a Chinese-built shopping mall. “This will help us achieve our goals as laid in the Economic Recovery Plan (ERP).”

With better data on Chinese investments in Africa it is becoming easier to see what the country is doing on the continent. What remains up for debate are its intentions.