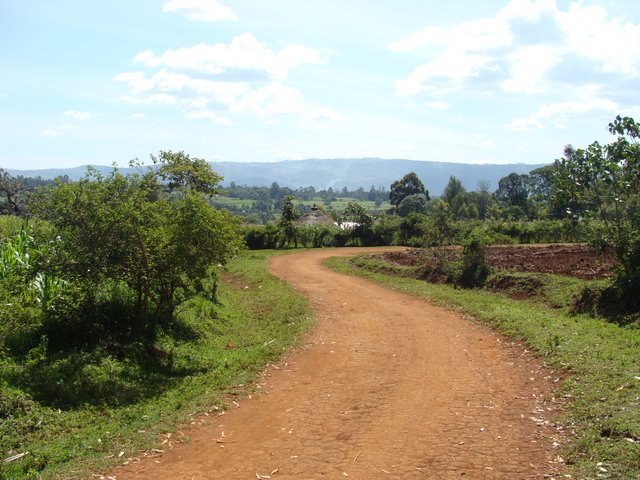 Western Kenya is a radically different landscape from the crowded city of Nairobi, the southern plains that make up Masai Mara and the arid north. The city of Kisumu is settled along Lake Victoria. A rapid ascent begins as soon as one heads north on a matatu or large bus. The hour and a half ride to Kakamega, on a good day, passes through fields of tea, maize and sugarcane.

The higher altitude in Kenya’s Western Province makes it a unique region for agriculture. Until recently, it has seen little of the development focus that is placed on the slums of Nairobi and the drought-prone north. Now, it is the base for some of the most important innovations. The self-proclaimed ‘randomistas’ deployed randomized control trials to test the most effective aid interventions. The studies returned exciting evidence such as the cost-effectiveness of distributing deworming medicines and treating water with chlorine.

The same region is home to a pilot program aimed at improving individual farms. The One Acre Fund is a social enterprise developed by Andrew Youn, a Yale grad with a Northwestern MBA who learned about agriculture gaps in Africa while working on capacity building for social workers and doctors to see HIV/AIDS patients. The story goes that he observed two neighboring homes in Western Kenya where one had much higher crop yields than the other. It was apparent that the problem was not the land itself, but the technology available to each of the farmers.

The One Acre Fund (OAF) began in 2006 with 38 farms. The basic idea is to teach proper farming techniques like plant spacing, picking weeds, tilling the soil and waiting for the rains to begin before planting. OAF would sell seeds and fertilizer to farmers and charge a small interest. If done correctly, farmers could dramatically increase their yields to the point of easily paying back the loan and still having more money than years past.

OAF’s continued growth captured the attention of former reporter and Chicago Council on Global Affairs senior fellow Roger Thurow. He went out to Western Kenya to observe Youn, OAF and the farmers who participate in the program. The result is the recently published The Last Hunger Season: A Year in an African Farm Community on the Brink of Change.

Readers are taken on a year-long journey with four farmers, Leonida, Rasoa, Francis and Zipporah, as they turn to OAF in the hopes that its farming methods will provide the lasting change that they seek. Thurow writes with a pace that leans towards detail about individuals, but tends to neglect some of the large political issues at hand. A sprinkling of local phrases throughout the book wear thin over time.

“Wanjala” or hunger makes numerous appearances that feel forced as if to try to say how hard things are for the families. What is more effective are the descriptions how the families must cope with the dry season. From meals consisting of only tea to the impacts the lack of food has on the ability for children to succeed in school, the importance of food becomes apparent.

The most compelling component of the story is of Leonida. A community leader, she struggles with her finances due to paying for her son’s private school fees. The hunger season wears on and she must scrape money together to keep her son in school. The sacrifice for education means that the family must get by on tea and the occasional meal. It tells the story that is not captured in the statistics that discuss the number of people living on $2 a day.

The reality for the world’s poor is that money does not come in on a consistent basis. For farmers the harvest brings in food that can be eaten and sold. Some other work helps with income, but that sudden rise in income is one side of a coin that is barren when flipped over.

Agriculture in Kenya is challenging in part because of the lack of ability for farmers to connect with proper markets. At the time of harvest crop prices are at their lowest. Maize, the staple crop for Kenya, floods the market as farmers try to make money so that they can pay for other goods and services. The prices slowly rise as families run out of maize and need to return to the market to buy food for their families. Corruption, poor regulations and a lack of a futures market all combine to create the problem.

Thurow offers an optimistic take of the problem by featuring OAF as one of the potential solutions. The evidence from the program shows some exciting results in terms of increasing yields for farmers, but many obstacles stand in the way of rapid progress. One section delves into some of the problems with introducing new seeds and getting them to the farmers. There is also the issue of crop diversification and the reliance on sugar cane as a cash crop.

Finally, there is underlying question of whether it is viable for the majority of an economy to rely on agriculture. The book avoids this altogether favoring a focus on the possibilities of better crop yields. Even with that opportunity, problems such as health and education stand in the way. Malaria is a frequent occurrence in Western Kenya (I would know well, I got it when I lived there). Education requires money and the further a child progresses the more expensive the cost.

The Last Hunger Season is not meant to address the structural problems. Rather it is a book that provides a diary of four farmers in Western Kenya. OAF is meant to feature as the potential for hope, but the draw are the farmers and their families. Thurow is successful in showing the challenges faced by each of the families. Some times it is bad luck and other times it is a matter of circumstance.

Readers will connect with the main characters and be left feeling some level of hope and equally despondent. For someone wanting to get a better understanding of how the poor live, The Last Hunger Season provides a compelling and easy to consume narrative. What lingers is whether OAF or any of the interventions coming out of Western Kenya will propel the poor to a life away from poverty.

Disclaimer: I was provided a review copy of the book by the One Acre Fund. The views expressed are my own.