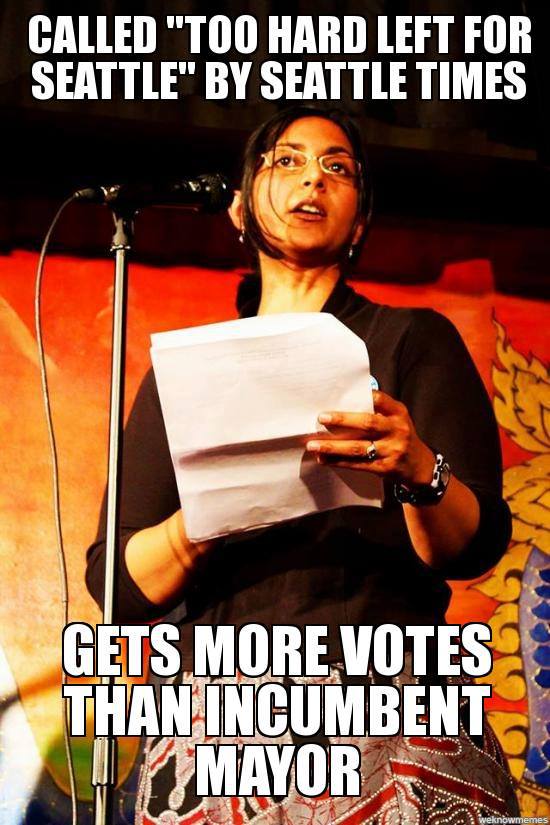 We’re all familiar with the fear-mongering that goes on when it comes to socialism, communists, and anyone deemed outside the “mainstream” of American politics. The right-wing is fond of calling President Obama a socialist – even as he pushes for a massive, corporation-friendly free-trade agreement – without explaining why that would be a bad thing. Perhaps we can chalk up most of the hysteria against further-left-than-liberal figures to the Cold War.

In Seattle, economics professor Kshama Sawant ran on an openly socialist platform against a longtime capitalist, Democratic incumbent in November. And she won.

Today, we explore with Sawant why her campaign was successful, why socialism seems to be gaining momentum, and her analysis of global poverty – including how her views are informed by her upbringing in India, where she says extreme poverty was rampant right alongside staggering wealth. Why was one person rich, and someone living next door destitute? Like many in the development sector, “I was obsessed with this question,” Sawant says. But it drew her to socialism and politics, not aid.

And no discussion of the humanitarian industry is complete without a mention of the world’s largest philanthropic institution, based here in Seattle: the Bill and Melinda Gates Foundation. While Sawant has some strong words for Gates, there’s also some common ground between this socialist and the billionaire on the question of what kind of aid works. Tune in!