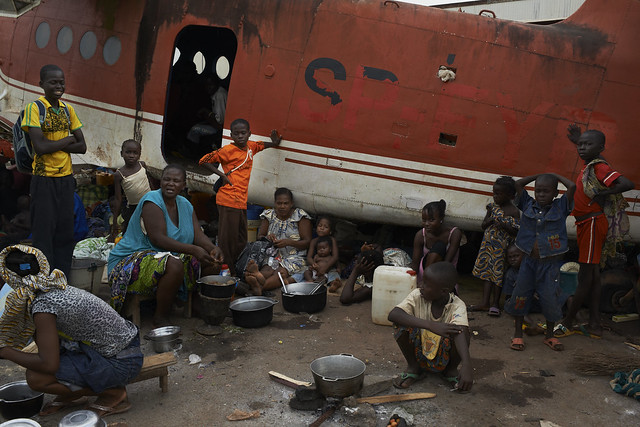 Doctors Without Borders tried to once again call attention to the ongoing violence in the Central African Republic. The organization has treated tens of thousands of people for injuries from grenades, machetes and more, since December. It said that the world was not doing enough to address a problem that has continued to deteriorate since the overthrow of the government last March.

This week, I speak with Muriel Tschopp, International Rescue Committees’ Emergency Field Programme Coordinator.  She is on the ground in Bangui, the capital of the Central African Republic, where much of the international response to the crisis is focused. Bottom line is that this crisis can likely be averted, before it gets worse with the rainy season, simply by beefing up the peacekeeping presence. Says Tschopp:

“The majority of the people are trapped in the middle” between Muslim and Christian extremist militias, explains Tschopp. Much of the  fighting may be drawn across religious lines, but current tensions are not deep rooted. There’s a long history of the two sides getting along just fine, with lots of intermarriage and little bloodshed.

The opportunity to change the course of violence and restore order to the Central African Republic is there, but security is sorely needed. Tschopp’s sentiments reflect that of many humanitarian organizations working in response to the crisis, including the UN.

In the headlines portion, Tom Murphy and I discuss an interesting new study on savings and loans groups in Uganda. After the NGOs left, people started forming their own group, to the surprise of the researchers. We also heard from Tom about his new series, Migration Matters. He explains why he is interested in the issue of immigration and brain drain.