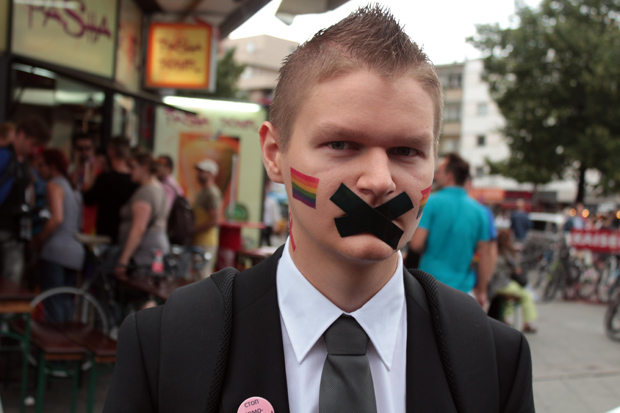 Do the Olympics go hand in hand with human rights violations? If we look at the history of the games, it sure looks like it. “The Olympic Games have displaced more than two million people in the last 20 years, disproportionately affecting minorities such as the homeless, the poor, Roma and African-Americans,” according to a 2007 study from the Centre for Housing Rights and Evictions, including when the games were held in Seoul, Beijing, Melbourne, and even Atlanta.

So it shouldn’t be a surprise to anyone that the Winter Olympics in Sochi, Russia this year are taking place amidst a host of human rights violations.

Russia’s vicious discrimination against gay and transgender individuals has, quite appropriately, attracted a lot of attention in the West. But only in the past few days, with the Olympic competitions well underway, have any of the major corporate sponsors bothered to respond to charges that they’re underwriting an event that promotes Russia and masks the abuses of its people.

And as with past international sporting spectacles, the workers who weren’t paid and the residents who were displaced in the rush to build stadiums have gone largely unnoticed.

Tanya Cooper, a Moscow-based researcher for Human Rights Watch, takes us behind the games and explains how each of these human rights abuses has unfolded. She says reactions to these offenses from sponsors as well as from the International Olympic Committee itself are too little, too late.

Still, she says, they’re encouraging signs and we shouldn’t give up hope of reforming future games.Keeping the pressure on might ensure that the thousands of migrant workers who built the Sochi facilities get paid what they’re owed. Listen to hear how.

In the headlines portion, Tom Murphy and I discuss why the fall of the US empire is great for the world, how British right-wing politicians are attacking foreign aid, and how a Nairobi-based director is making fun of the NGO industry in a new television series.